The Forgotten Land: Liman Prince of Egypt by Josephine Kelly 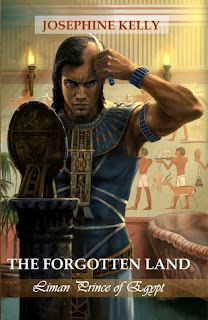 Disclaimer: This book was provided for me in return of an honest review. I was not paid to do this review, except for receiving a copy of the book.

When the publicist pitched the synopsis to me I was really intrigued and agreed to read and review the book. It was described as a book with comedic and dramatic elements, and most of all, featured an Egyptian theme. I haven't read too many books with Egyptian themes, so I was really interested in giving this one a try. This was one genre of fantasy I wasn't familiar with, and that prospect excited me. This book also has illustrations, which were quite detailed and provided me with the opportunity to get more immersed into the story.

I think I would categorize this book as being either middle grade or young adult. The writing was very descriptive and blunt, so it was clear to me from the start that this is a book about the story, not the art of writing. However, the writing was still quite descriptive and I really got a great sense of each character and mood for the specific scene. It was one of those books that I had absolutely no trouble visualizing in my mind, so it was quite a relaxing book to read. Sometimes books can be too dense and can be more stressful than relaxing to read, but this one was the opposite. It wasn't dense, but there was still a lot of action and excitement - it was just portrayed in a way that felt like I was sitting back and watching a movie, instead of picking apart the details to write an essay about. There was a great mix of action and humour, and although the humour wasn't my style, it was still appreciated. I did find the jump from scene to scene to be a bit jarring at times, and the influx of characters was a bit overwhelming. However, the illustrations were an enjoyable way to help me keep it all straight.

This is one of those books that I did enjoy, but wish I had when I was younger when my interest in Egypt was just blossoming. As an adult, I do have a general basis of ancient Egyptian culture under my belt, so although I did pick up on a few references, I was hoping there would be more. The first book in any series is all about the world-building and character introductions, in which there were plenty of both but still room for more to layer on. Some of the characters did meddle together in my mind, but I found the illustrations really helped keep most people distinct and they were also very well drawn.

Overall, I feel this is a good book for a parent to read out loud to a child at bedtime. The protagonist goes on an adventure to both find his place in the world and to possibly help his people so it is full of action and humble characters. I wished there were more prominent Egyptian features and a bit more clarity on the cast of characters, but that didn't hinder me from enjoying the story too much.

Video review to be added soon. :)